Wetzikon, Switzerland, October 2018 – The raw material for spinning synthetic fibers originates from well-controlled processes in chemical plants. This is why contamination with foreign matter occur very rarely. However, synthetic yarns like polyester can have different fiber qualities with different glossiness. Mixed-up yarns can lead to defects in the following processes along the production chain. Today, the visual inspection of these costly errors is still very time- and labor-intensive. PT. Superbtex, Indonesia, strives for a simpler and more efficient solution to overcome this issue and has addressed Loepfe for a suitable solution. The cooperation of these two companies has now revealed impressive results.

Different fibers different glossiness
The PT. Superbtex Group is a textile company based in Indonesia. It has been founded in 1974 and operates four facilities, which are located in the province of West Java. In the largest spinning mill of the company with 54.000 spindles some 500 staff are employed. They produce polyester yarns with a count range of Ne 10 – 60. The regular production consists on yarns counts of Ne 20, 25, 30 and 40. The major portion of the production is delivered to the local market for both weaving and knitting applications, while some 15 % of the production is exported. PT. Superbtex is always trying to improve all processes along the value chain. In order to reach a better profitability, the focus is on optimal quality and higher efficiency.

“We use several different polyester fibers in our spinning mill”, says Sendjaja Halim, who is responsible for the spinning mills of the PT. Superbtex Group. And he adds: “Dull, Semi-Dull, Bright, and Super-Bright are the typical fiber qualities we use, and all of them have a different glossiness.” The difference is hardly visible, when looking at the spun yarn. As an alternative to direct visual inspection of the bobbins, the inspection can be conducted under illumination with ultraviolet light. But even then, the difference is difficult to see. If the inspection is done after the winding process, and the wrong yarn is near the inner part of the cone, it is hardly visibly even under ultraviolet light. In addition the visual inspection is very labor-intensive and therefore expensive. Mixed-up yarns can lead to defects in the following processes along the production chain for example during dyeing. Especially in weaving very long errors can occur, when the wrong yarn is used as warp thread. A single bobbin with the wrong yarn could lead to expensive complaints by the customer.

Foreign matter clearing with new feature
When spinning polyester, yarn clearers are used in most cases only to eliminate process related yarn faults, to monitor hairiness and imperfections, and to ensure the proper yarn count. Foreign matter detection is usually not necessary in polyester spinning, as the raw material originates from a well-controlled source – the chemical process. However, the above-described problem of different glossiness can be solved by installing the yarn clearer YarnMaster ZENIT+ with the OffColor feature. The new functionality has been developed for the detection and elimination of very small color and shade variations in mélange yarns. They can arise, when bobbins with slightly different colors are mixed up during the winding process, or the fiber blend of the differently colored fibers change over a certain length.

As the glossiness of the different fiber qualities used in polyester spinning and winding also vary, due to the different amounts of matting agents used in their production, Loepfe came up with the idea, to test the new feature in the PT. Superbtex spinning mill. Extensive tests have been conducted at the largest spinning mill of the group. A Savio Eco Pulsar winding machine has been equipped with the new YarnMaster ZENIT+ including the OffColor feature. The test runs have been made with Ne40 polyester yarn of two types: super-bright and semi-dull. Various settings have been tested in order to reach the optimum performance of the OffColor detection. In this particular case, the observation length has to be relatively long to ensure, that short-term effects are equalized. After triggering the set alarm limit the winding position is blocked. The winding spindle ejects the faulty bobbin once the alarm is confirmed. The operator can then remove the bobbin and the winding continue.

During the tests, wrong bobbins have been inserted on purpose. Sendjaja Halim is commenting the promising results: “We have been able to detect all bobbins with the wrong glossiness.”

Lucrative results
The utilization of the new OffColor detection for polyester yarns has been extensively tested in the PT. Superbtex spinning mill in Indonesia. The 100 % detection of wrong bobbins in the winding process can guarantee excellent results in respect of yarn with different glossiness. Thanks to the new OffColor detection feature of Loepfe´s YarnMaster ZENIT+ the labor-intensive and therefore expensive visual inspection of the bobbins is no longer necessary. Although customers in the past have been skeptical to use foreign matter detection in polyester spinning, the new YarnMaster ZENIT+ proves to be very advantageous in quality assurance.

Functionality: OffColor detection
The new OffColor detection uses the F-Sensor, which is an integral part of YarnMaster ZENIT+. In order to detect faults, the sensor illuminates the yarn from several sides. A special algorithm converts the signals resulting from reflection and transmission of the light into a luminosity difference. The reference thereby is the brightness of the yarn color. Depending on the base-color, the clearer adapts to the basic brightness of the yarn and is thereby able to detect color and shade variations as well as glossiness differences. In the event of an objectionable luminosity fault, the clearer monitors the affected fault length and cuts only once the detection stop limit is reached. By setting various parameters the user can select the optimal tolerances. By adding the OffColor feature, Loepfe proves, that it develops solutions based on the ever-growing requirements of the spinner and sets successfully a new benchmark. With this feature YarnMaster ZENIT+ became even more versatile in its application-range. 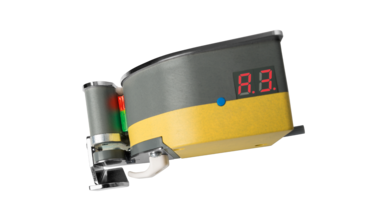